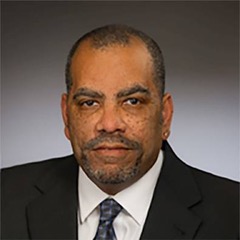 (The Rev.) Dr. Hugh R. Page, Jr. is Associate Professor of Theology and Africana Studies at the University of Notre Dame. He also holds several administrative positions: Vice President, Associate Provost, and Dean of the First Year of Studies; Acting Chair — Department of Physical Education and Wellness Instruction; and Chair — Department of Africana Studies. He holds a BA degree with a major in History from Hampton University; MDiv and STM degrees from General Theological Seminary in New York; a DMin in Applied Ministries from the Graduate Theological Foundation (Mishawaka, IN); and MA and PhD degrees in Near Eastern Languages and Civilizations from Harvard University. His particular research interests are in early Hebrew poetry; the cultural content of ancient epic; theories of myth; Africana biblical interpretation; poetry as medium for theological expression; the use of religious traditions and sacred texts in identity construction within the Black community; and the role of mysticism and esotericism in Anglican and Africana spiritualities. In the aforementioned work, as well as in both pedagogical and service endeavors, he is keenly aware of the ways in which biblical traditions have been used in ways both harmful and liberating.

An Episcopal priest, poet, musician, photographer, martial artist, and certified tennis teaching professional, he also studies the ways in which non-traditional Renaissance paradigms for education (foundational and continuing) both integrative and holistic can be utilized to promote discernment, intellectual growth, personal health (e.g., spiritual, intellectual, and physical) and productivity among students (undergraduate, graduate, and professional), clergy, and independent adult learners.

Orienting engagements of the Bible and other sacred traditions toward aims that promote justice, equality, and the promotion of human dignity has been one of the hallmarks of his work as scholar and cleric. His sole-authored works include Israel’s Poetry of Resistance: Africana Perspectives on Early Hebrew Verse (Fortress, 2013); Exodus (Bible Reading Fellowship – Peoples Bible Commentary Series, 2006); and The Myth of Cosmic Rebellion: A Study of its Reflexes in Ugaritic and Biblical Literature (Brill, 1996). He is also general editor of The Africana Bible: Reading Israel’s Scriptures from Africa and the African Diaspora (Augsburg Fortress, 2010); one of the co-editors for both the Fortress Commentary on the Old Testament and Apocrypha (Fortress, 2014) and Esotericism in African American Religious Experience: “There is a Mystery” … tor of Exploring New Paradigms in Biblical and Cognate Studies (Mellen Biblical Press, 1996).