The White House, on Tuesday, demonstrated its interest and capacity to engage the faith-based community and leadership in its strategy for addressing environmental stewardship and climate change. For the second time in two years faith leaders from across the country, and across the political and religious spectrum, were invited to the White House for a day of briefings and dialogue, co-hosted by the U. S. Environmental Protection Agency.  An estimated 100 representatives responded. Two panels moderated by EPA staff invited national faith-based leadership to share practices and commit to moving EPA carbon pollution standards forward.

1) Cut Carbon Pollution in America: In 2012, U.S. carbon emissions fell to the lowest level in two decades even as the economy continued to grow. To build on this progress, the Obama Administration is putting in place tough new rules to cut carbon pollution – just like we have for other toxins like mercury and arsenic – so we protect the health of our children and move our economy toward American-made clean energy sources that will create good jobs and lower home energy bills.

2) Prepare the United States for the Impacts of Climate Change: Even as we take new steps to reduce carbon pollution, we must also prepare for the impacts of a changing climate that are already being felt across the country. Moving forward, the Obama Administration will help state and local governments strengthen our roads, bridges, and shorelines so we can better protect people’s homes, businesses and way of life from severe weather.

3) Lead International Efforts to Combat Global Climate Change and Prepare for its Impacts: Just as no country is immune from the impacts of climate change, no country can meet this challenge alone. That is why it is imperative for the United States to couple action at home with leadership internationally. America must help forge a truly global solution to this global challenge by galvanizing international action to significantly reduce emissions (particularly among the major emitting countries), prepare for climate impacts, and drive progress through the international negotiations.

McCarty gave a rousing assessment of the success and continuing efforts to address the environmental impacts of climate change to calls of “preach it sister.”  She only alluded to the challenges raised more boldly today in an Op-Ed piece in the New York Times by Representative Raúl M. Grijalva posed by monied interests in the outcome of policy efforts by this administration. http://nyti.ms/Ny8fkJ. Neither McCarty nor any other speaker directly referenced the present issue of a permit for the Keystone XL pipeline, nor the larger issues of species extinction, cataclysmic violence in human society, etc.

Melissa Rogers, Special Assistant to the President and Executive Director of the White House Office of Faith-Based and Neighborhood initiatives, and Dan Utech, Special Assistant to the President for Energy and Climate Change, White House Domestic Policy Council also welcomed the gathering with brief remarks. They characterized the White House position as meeting a moral obligation to act, addressing the health needs of vulnerable populations who are first and most deeply impacted by climate change, and leveraging the economic opportunity that clean energy technology offers to the U.S. business agenda.

So while the Administration stakes out the moral high ground, it still looks for pragmatic arguments to move the agenda forward. This balance was advanced by the economic model of growth which framed the impacts and opportunities conversation, and by the limits to the political mandate that it has under law leading to the focus on the EPA’s proposed carbon pollution standards and the resources offered in the ENERGY STAR ® Action Wookbook for Congregations which was touted again at this meeting and referenced  in the panel discussions as well: www.energystar.gov/CongregationsWorkbook.

The urgency and the importance of the impacts of climate change were acknowledged as drivers of the political response, but the prospects of making a difference are clearly a burden and responsibility for individuals and communities rather than the government, given the state of denial and the obstacles to progress that constrain government action today.  That appeared to be the rationale and the hope in this gathering. The President will speak eloquently about the challenge and frame its moral dimensions, but the Administration’s response will be focused on executive actions and administrative decisions which are decidedly limited in their scope and will likely be challenged in court in any event.

The first panel, “Uniting to Address Climate Change and Environmental Justice”, included Cecilia Calvo of the United States Catholic Conference of Bishops, Rev. Gerald Durley a Georgia faith leader and spiritual confidant of the President, Rev. Emilio Marerro of Esperanza, and Bishop Vashti McKenzie of the African Methodist Episcopal Church. The panel reflected significant progress ver the past two years in bringing high ranking leadership from communities of color to the table. This seems to represent a wider recognition of the direct costs of climate change on those who suffer higher rates of poverty and higher health consequences of environmental degradation especially in those communities.  Bishop McKenzie best summarized the message of what these individuals in their leadership roles were doing. “Get educated and get working,” she said to the affirming echoes of others on the panel.

The second panel, “Pulpit Leaders Taking Action on Climate” was constructed to focus more specifically on those who were educated and working. It was moderated by Jerry Lawson, who leads the Energy Star® program of the U.S. Environmental Protection Agency. Presenters included Loay Assaf of the Muslim American Society of Boston, Rev. Dr. Carroll Baltimore of the Progressive National Baptist Convention, Arjun Bhargava of the Hindu American Seva Communities, Rev. Canon Sally Bingham founder of Interfaith Power and Light, and Rev. Mitch Hescox of the Evangelical Environmental Network.  Representing a religious base many times larger than that reached by the Energy Star® program, each speaker first shared a theological basis for taking incremental but relevant  steps forward in response to the threats of climate change. While advancing energy conservation and technology such as solar energy, the panel also affirmed Rev. Hescox’s observation that “Science is the wrong place to start – values have to be the starting point.” Rev. Bingham made the same point in noting that whatever one’s political persuasion or scientific literacy, we all want safe and healthy environments (clean air, clean water, healthful food) in which to raise our children and which preserve the glory of creation.

While the rhetoric/action gap may be narrowing, there was still a clear bias to political pragmatism in the day. The sense of urgency has not yet quite tipped the balance to radical response. Lifting up and acclaiming the high moral ground in the debate, the Administration and government are forgiven the lack of outcomes adequate to mitigate the impact detailed by science in deference to order and hope that more rapid change is just ahead.

What the faith-based community has introduced into the discourse are the religiously charged truths that will light the path forward if we are, in the end, to succeed in fulfilling our stewardship for all creation.  While the theory of change here is still fundamentally individualistic, i.e. American and exceptionalist – bottom up, and the action agenda still largely one of accommodationism, there is an emerging vocabulary of potentially transformational power. Yes we need to move toward the elimination of fossil fuels and the carbon pollution they entail, even away from animal husbandry and the methane costs of our reliance on meat diets (noted Arjun Bhargava as an aside).  But the real work of faith-based communities is to be the voice of a universal Awakening, the practitioners of radical Stewardship, the truth-tellers of Consequences, the care givers to the Vulnerable and all Creation, vested with Enthusiasm, striving through inculcating the skills of Resilience to manifest the root salvation of Love. As I attended to the wonderfully diverse array of voices who shared the day, this shared set of values built to a chorus in the room. 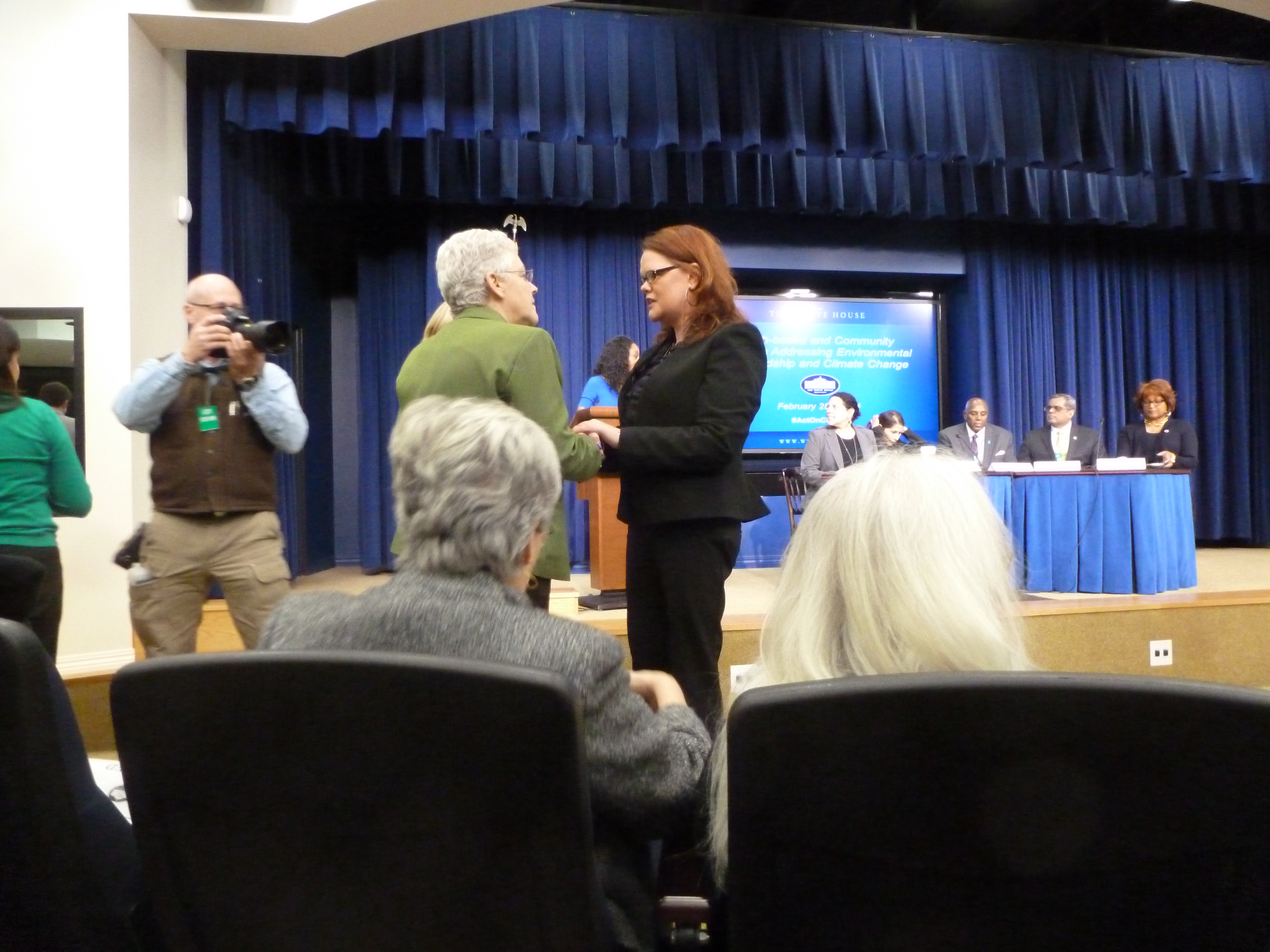 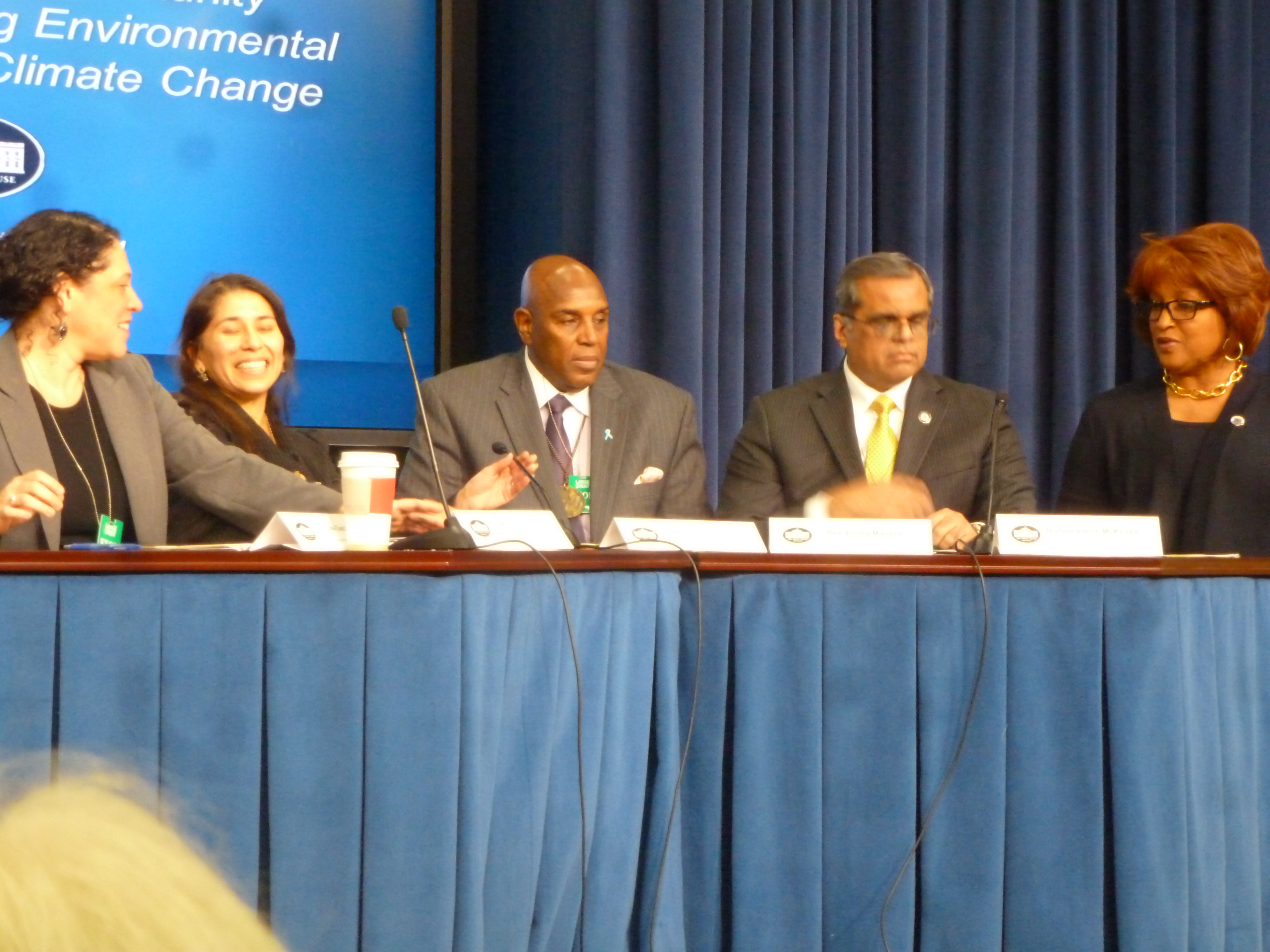