Christiana Peppard’s book is a perfect introduction to the issues of climate change and rationale for participating in the forthcoming People’s Climate March on September 21, 2014 in New York City. An ethicist and theologian on the faculty of Fordham University she offers a powerful text for the single reader and for study groups. 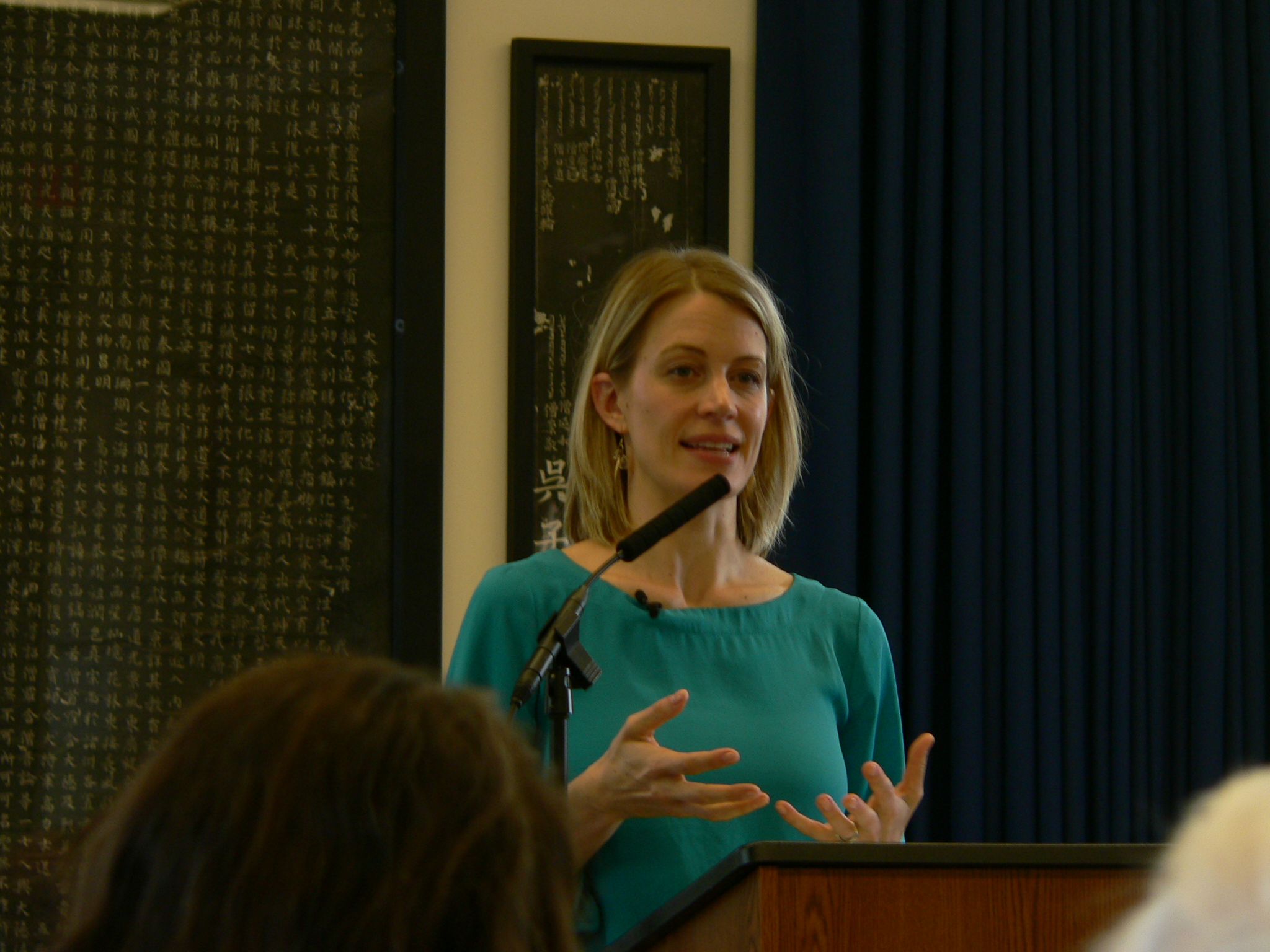 First of all, she writes beautifully, in the traditions of Terry Tempest Williams and Wendell Berry, in the lineage of Thomas Berry and Rachel Carson, perhaps unexpectedly for an ethicist and theological scholar but reflective of her opening appreciation for the mystery, beauty, and importance of water and language.

Located necessarily at the intersection of many disciplines, Peppard’s is still a focused voice of Catholicism, residing both within its theological discourse and at the critical juncture where it has interesting life and challenge as Liberation Theology and Political Economy. She writes from the very beginning with expectancy for the forthcoming encyclical from Pope Francis on sustainability, and from a non-Catholic lay perspective with a hope that that message will be informed by the kind of thinking and questions raised here. The book opens with this self-characterization:

This book is an interdisciplinary analysis of the significance of fresh water in an era of economic globalization. Situated within the broad discourse of ethics, it draws on multivalent resources within a range of disciplines, including: theology, hydrology, ecology, economics, religion and science, social theory, and history.  p. ix.

Broad compass indeed for a short 188 page treatise. But delivery is made on the promise. The chapters move from theology and ethics to science and public opinion, into human rights and economic theory, enriched with case studies on agriculture, political challenges of arid states (looking at the watershed of the Jordan River), at the broad issues of climate change and the particulars of hydraulic fracturing, re-emerging in the liturgical poetics of theology and practice.   The facility of her thought and language are caught nicely in the titles of her last two Chapters: Chapter Eight, “Water from Rock: Hydraulic Fracturing”, and Chapter Nine, “Women, Wells, and Living Water”, the later bringing all of the promised multivalency to poignant focus on where the burdens most heavily weigh in this valuing of human rights in a world of commodification and multi-national corporate privatization of arguably life’s most precious of all natural resources, fresh water.

The theoretical and theological foundations of this book, though complicated, are managed with clarity and serve an early reminder that activist communities, such as those that gather under banners like Interfaith Moral Action on Climate, Watershed Discipleship, or the Center and Library for the Bible and Social Justice, know and look for rigorous ethical frameworks in which to embed their research, training and action agendas. Peppard’s rhetorical conversations with Edward Schillebeeckx and feminist theologians like Rosemary Radford Reuther or Sallie McFague on universalism versus relativism, and embodiment and incarnation, illustrate the important questions such efforts raise and the benefits that a serious intention to see the particular questions of a climate crisis or capitalism’s move toward monopolizing fresh water as theological and ethical issues have to offer. She offers that:

Three fundamental observations undergird this book. First, fresh water is a sine qua non of human existence: it is a universal, baseline requirement. Second, it is sui generis: there is no substitute for fresh water. Third, these features are universal, but they are manifest only in particular contexts. These insights unleash major philosophical and ethical implications. p.17

In this framing Peppard makes clear the book is about more than just fresh water, it is also about discernment, reality, justice, survival.

Chapter Two is a good place to start if one needs a basic primer on the facts regarding global fresh water and the crisis of its growing scarcity. Peppard makes a case for understanding water more as a fossil fuel than as a source of renewable energy. And she reinforces that we face a social and political problem at a structural level, not an individual challenge of conservation.

The juxtaposition of the choice between water as a human right and water as an economic commodity, examined through the phenomenon of bottled water and the political debate over the broader issue of human rights leaves no doubt where the ethicist comes down and offers strong language and story for defining and describing water as a human right. Chapter Three segues into a twinning with Chapter Four in which the Catholic Church’s stance on fresh water as a right to-life issue may surprise readers with both its provenience and its perseverance in the Church.

As the case studies begin to frame the narrative and locate the ethical and theological issues, The Agriculture/Water Nexus begins by introducing complex metrics in clear, understandable descriptions. There are the issues of consumptive and nonconsumptive uses of water, of our water footprint, of the hydrological technologies in the forms of irrigation, dams, water transport and the amplification of damage through pesticides, herbicides and fertilizers all presented with just enough detail to be frightening and convincing. One might wish that Congresses of climate deniers might be forced to offer their pronouncements on the limited impact of human uses of water from the middle of the Aral Sea/Desert.

As Peppard turns her hydrological hermeneutic on to the Jordan River the political undercurrents of water move to the surface and the radical call of discipleship and stewardship of Jesus find themselves keeping company with contexts of diplomacy and conflict. Water has something approaching sacramental value in virtually all faith traditions, but the chapter on the Jordan River is a wonderful primer on the Christian integration of the natural world as attentive to the divinity of Christ as celebrated in the rite of Baptism, and would be of interest to interfaith dialogue around fresh water issues at the heart of the climate crisis.

Peppard also demonstrates a wonderful skill in selecting illustrative quotations from her sources, having been lead to interviews and relationships by their writings she has use of both their publications and her delightfully elicited reflections, as is the case, for example, with Dan Hillel whose memories and descriptions of the Jordan are poignantly apt. Avoiding the temptation of extracting quotations of quotations, the spirit of the internal dialogue might be caught in notice that: “By way of conclusion, I propose several thematic immersions into the Jordan River that can orient ethical reflection about the riparian confluence of theology, hydrology, and ethics.” There follows three: Bodies of Water, Waters of Memory, and Holy Waters.

Water is such a shape shifter that its power and importance is almost beyond our grasp. The forms in which it occurs, the engine of impact it drives in each form, the implications as agent and agency in politics and economy are enormous. Peppard’s pen is like a jeweler’s tool as she writes through the transformations. I had never thought of water as more like a fossil fuel than a renewable resource, but in its integral role, and subsequent contamination, in mineral and oil extraction, and when regurgitated as flowback in hydraulic fracturing, it quickly loses its romance as pure, plentiful and renewable. It is, even more than carbon, the tool of climate change, a kind of Bride of Frankenstein in the drama new unfolding. It is the elixir of doom in the tar sands extraction; the lubricant of resource wars in the more pessimistic scenarios of our future.

When speaking publicly about the publication of Just Water Peppard describes Chapter Eight, Water from Rock: Hydraulic Fracturing as an add-on. She had not anticipated how much there was to say about this rapidly expanding issue and certainly along with tar-sands it has become the best vehicle for promoting attention to climate change and human impact. She treats the scientific and political questions as two narratives integrally related as they are by corporatism’s capacity to restrict research or bury outcomes in secrecy by virtue of legislation/regulation known as the Halliburton Loophole. It is impossible to assess the impact of chemicals in the fracking fluids if one doesn’t know their make-up and can’t examine their impact longitudinally. She also offers a nice twist in observing that the religious rhetoric used to justify explorations and extraction, processing and marketing of natural gas as a “blessing” and “wondrous gift” — to the fossil fuel industry perhaps, less convincingly to the general public or to creation.

Six sets of questions must be answered, Peppard argues, before we might be persuaded to abandon the “Precautionary Principle” of risking no harm until the way is clear. She calls them the six “C’s”: Consumptive Use of Fresh Water, Contaminated Flowback and Produced Water, Chemical Additives, Contrived Ignorance, Community Burden/Corporate Profit, Conclusive Proof of Safety Should Precede Corporate Profit. The concepts and their scientific bases have all been introduced in earlier chapters. The dependence of ethical inquiry on philosophic reasoning and logic serves those well who want or need to boost the theological questions of justice in the courts of public opinion and biased journalism. Peppard recognizes that most of the choices and decisions will be presented in the marketplace, economic and political, but if those choices are not adequately informed by science, theology and ethics, they cannot be good decisions and things are unlikely to turn out well, for anyone.

In her closing chapter, Women, Wells, and Living Water, Peppard preaches a sermon practicing again her hydrological hermeneutics. Suggesting there are ways of hearing the parable of the woman at the well that require us to revisit questions of status, gender, and everyday life in the time of Jesus, and still earlier in the story of Hagar and Ishmael, she also brings us to the border of the United States and Mexico, onto the land of the Tohono O ‘odham, to localize a virtually universal truth that virtually always and everywhere the living given essence of water is proved through the work, a burdensome work, of women. This final embodiment of justice further raises the stakes of how we solve the global water crisis, making sure that we bring the tools of ethics and theology to bear as fully, or more fully than the instruments of markets and technology. That is the foundation of getting it right.

In a closing Coda, Lessons in Liquidity, Peppard offers a preliminary or partial action agenda. If adopted it would discipline whole communities to their collective accountability for addressing global fresh water scarcity. Her guidelines would open more questions and identify still more necessary responses as they were followed. For a short study Just Water is well-footnoted, has a good bibliography and list of additional resources and index. But the best place to start I think, would be in reading her book.