More about our new Board President, Nicholas Johnson 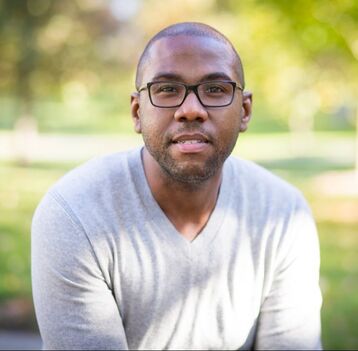 Did you know that, in addition to being a pastor, a scholar, and an activist, the new President of CLBSJ’s Board was once a park ranger? Rev. Nicholas Johnson worked at Thomas Edison National Historical Park in West Orange, NJ from 2006-2013. The site was Thomas Edison’s home and workplace for the latter 40 or so years of his life. He gave tours of the site and created educational programming for both school groups and general audiences. “It was a really fun time in my prior professional life,” he remembers.

Today Pastor Nick is still focused on helping people understand and harness power. We asked him to fill us in on several other aspects of his work and career.

Your bio says that your PhD work at Drew University is focused on Paul’s epistles, Revelation and the intersections of Africana postcolonial and new testament studies. What can you tell us about what questions you are trying to answer?

I am currently working on my dissertation, “Idolatry in Romans and Revelation: Toward an Africana-Decolonial Hermeneutic of Images.” It explores early Christian understandings of idolatry and how statements against idolatry in biblical texts are racial-ethnic responses to images and monuments set up by imperial regimes in antiquity. I employ this reading of idolatry to argue that current movements to dismantle Confederate statues and other colonial monuments venerating racial-ethnic hegemony and white supremacy are well situated within the biblical tradition. Questions that guide my research are: In what ways are public images and monuments reflective of power dynamics and views on race, ethnicity, gender, and class? What are the idols in our time that need to be abandoned for the sake of justice and liberation?

What has been your own journey as an activist? What issues an protest formed your political perspective?

My life in activism began in earnest as an undergrad at the University of Chicago around issues of race and economic justice. I helped lead an effort to increase wages and improve working conditions for the university’s dining hall and maintenance works, the vast majority being people of color. I also was a co-leader in organizing a group of Chicago-area activists to participate in the March for Justice Rally in November 2007.

You are doing some writing now about “the protestor’s Jesus.” What does this mean for activists; for Christology?

I, along with a friend/colleague, Brian Tipton, are working on a piece entitled “The Protestors’ Jesus: Race, Religion, and Revolution.” In it we explore how Jesus might respond to the shooting deaths of unarmed black people by police and systemic oppression and injustice within the U.S. The central claim is that there are stories from the Bible where Jesus partakes in revolutionary acts to change those institutions meant to police and enforce order — institutions perceived as oppressive by the local population. These stories show that there is, in fact, a Protestors’ Jesus.

In pandemic conditions, what hopes do you have for program and outreach for CLBSJ?

My hope for CLBSJ during these unusual times is to take full advantage of ways to engage scholars, activists, and faith communities digitally. I have been deeply encouraged by our Scholar-Activist Encounter series. The success of this series so far lets me know that we can continue to offer creative and substantive programming and outreach digitally post pandemic